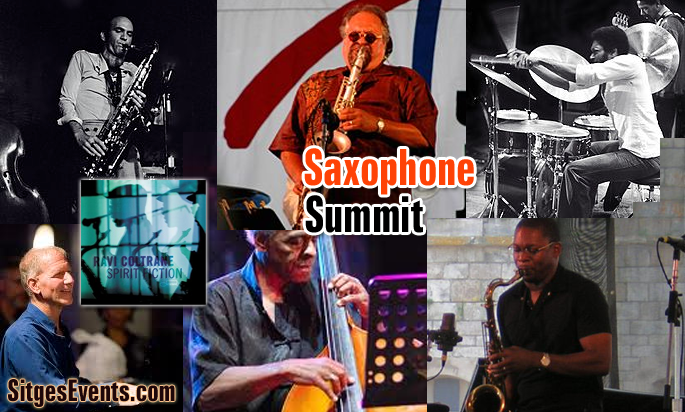 To explore the periphery of jazz, particularly through the streets and experimental saxophonist, John Coltrane. Ravi’s father.

Joseph Salvatore “Joe” Lovano (born December 29, 1952) is an American post bop jazz saxophonist, alto clarinetist, flautist, and drummer. Since the late 1980s, Lovano has been one of the world’s premiere tenor saxophone players[according to whom?], earning a Grammy Award and several mentions on Down Beat magazine’s critics’ and readers’ polls. He is married to jazz singer Judi Silvano.more

David Liebman (born 4 September 1946) is an American saxophonist and flautist.[1] In June 2010, he received a NEA Jazz Masters lifetime achievement award from the National Endowment for the Arts.more

Phil Markowitz (born 1952) is a jazz pianist and educator.
He graduated from the Eastman School of Music and in 1979 had his “first big break” working with Chet Baker’s band. He is most known as a sideman. He made a 1980 recording entitled Sno’ Peas with Eddie Gomez and Al Foster. He recorded two live duo albums with Dave Liebman as a member of Liebman’s group;[1] Markowitz calls this work the “biggest break of all” and they have worked together on and off for fifteen years. He has also served as a pianist in Bob Mintzer’s Big Band.more

Cecil McBee (born May 19, 1935) is an American post-bop jazz bassist, one of the most influential in the history of jazz.[1][2] McBee has recorded as a leader only a handful of times since the 1970s, but has contributed as a sideman to a number of jazz albums.more

William “Billy” Hart (born November 29, 1940 in Washington, D.C.) is a jazz drummer and educator who has performed with some of the most important jazz musicians in history.more

We use cookies to ensure that we give you the best experience on our website. Please only continue to use this site if in agreement.Ok​About cookies​