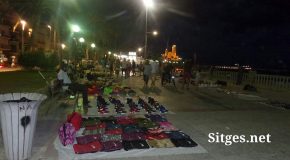 Sitges City Council ‘successfully’ tested, with good results, the presence of private security personnel coordinated with the Local Police (29th and 30th December 25 street vendors left without return). Hence deciding it will be continued during the 149 days they most appear (average 50 sellers but as many as 100)

More than half arrived in Spain directly from their country and 58% are without EU docs. 56% live in Vilanova & 17% claimed Sitges.

The vast majority (77%) would stop if provided an employment contract elsewhere.

As a result of the questionare, information sessions on issues related to the law and immigration regulations, family regrouping and the acquisition of Spanish citizenship, will be provided.

The mayor of Sitges, Miquel Forns, has valued positively the results of the device coordinated with private vigilantes, whose purpose is to ensure that the activity of the irregular street sale goes out of the public space. As it has advanced, “the weekend of the days 29 and 30 of December saw a strong reduction in the presence of street vendors. On the first day, Saturday, there were 25 in the first hour, once they started Patroling the Local Police and private agents left without return. ”

Forns stated that “with the results that we already have from the City Council, we have decided to maintain this device in 2019. From Easter, the Local Police will again have the support of the private company during the 149 days of the year in which there is more proliferation of irregular street vendors in our streets. ”

In recent years, the performances have been able to transfer the street sales of the streets of the town center on the Paseo de la Ribera and the San Sebastián beach. The number of salespeople has stabilized around 40 or 50, when other tourist towns in Catalonia have not stopped growing, the mayor said. However, the number of stores has reached 100 in peak moments.

The seller’s profile: Man, young and of Senegal

The Councilor for Welfare and Family, Mireia Rossell, explained the results of the socio-economic diagnosis of the profile of the sales people. Rossell has advanced that it is mostly Senegalese people aged between 18 and 28, of which only 6% are women. Vendors over the age of 40, minority, account for 19% of the total.

According to the diagnosis, more than half of the sellers have arrived in Spain directly from their country and 58% do not have a Spanish or European identification document. 56% say they live in Vilanova i la Geltrú and only 17% say they do so in Sitges. Regarding social data, most of the interviewed vendors have a level of primary or secondary education.

The majority started the activity through a friend or relative and worked independently. Of the 16% who works for someone, 60% goes to commission. The vast majority (77%) would leave the activity if it had the possibility of regularizing or having access to a formal employment contract.

Field work, explained Rossell, consisted of a questionnaire of 44 questions about personal data, social data and data about the activity as a maintenance. They responded by 31 irregular sellers in the place where the street sales took place, in different points of the Paseo Marítimo, the Paseo de la Ribera, the Frigate, the Punta and the San Sebastián beach.

Increase of 30% in the heading destined to employment plans

The Councilor for Economic Promotion, Aurora Carbonell, stated that “in line with what the socioeconomic study of informal street vendors suggests, the 2019 municipal budget has foreseen a 30% increase in the heading for employment plans , especially to cover seasonal jobs. ”

Carbonell explained that “the City Council will work to provide legal and administrative advice to businesses and businesses. Street vendors need to know their situation in the country. Employers, on the other hand, have to identify the needs they have of workers and they should be made aware of the benefits of hiring dedicated people now for informal peddling. ” In fact, the City Council will offer insertion for recruitment and insertion for entrepreneurship.

The comprehensive plan to minimize irregular street sales includes other actions, such as periodic information sessions on issues related to the law and immigration regulations, family regrouping and the acquisition of Spanish citizenship. It also contemplates the ‘Sitges Acollidor’ program, aimed at the newly arrived citizens, cooperation with the third sector and the program “Arrela’t de la Generalitat de Catalunya”, which provides for the referral of possible beneficiaries according to the profile and personal situation to sound social-labor outings. Other actions contemplated are the offer of places of craftsmen to people who exercise the irregular street sale in the Market of the Senses.