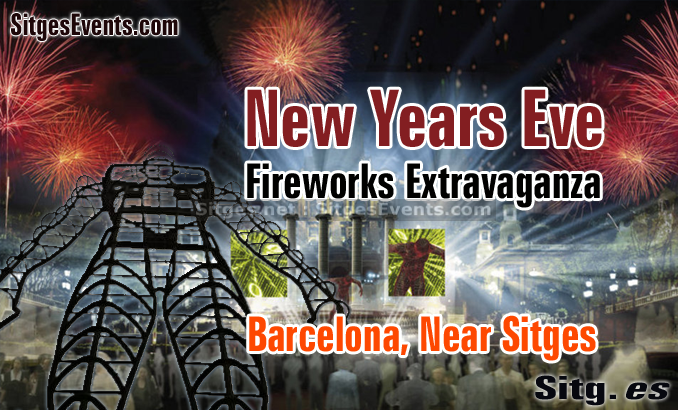 Barcelona is finally promoting itself as New Year’s destination, with fireworks in 2014 (400k€ worth).
To compete with other cities in the world
(e.g New years even in London, New York, Sydney, Paris, Berlin)
Though not a festival or party and largely to attract  international TV

Mon Bus Times to Plaza Espanya (Montjuic)
(often every 30 mins from Sitges Can Robert Park: 00:55 to get home to Sitges: approx 1 hour)
Please check all info (as we cannot guarantee they run!)

To compliment ancient customs, such as, eating 12 grapes as clocks chime midnight and making a wish (since 1895, a abundant harvest year for grapes)

BE SAFE:
Remain on guard against pickpockets, a ridiculous problem for visitors and locals alike. Especially in the queue whilst getting on a bus, as close proximity allows for scrum bag thieves to dip your pockets and bags.
Being drunk around the Gothic area, is a sign for muggers, often in groups (as too many friends have experienced)